The Cowal Peninsula is a land of rich highland diversity and home to charming hamlets and villages like Tighnabruaich, Strachur and Lochgoilhead.

Flanked by Loch Fyne and Loch Long and carved by the beautiful Glendaruel and Loch Eck, the Cowal Peninsula is a land of rich highland diversity and home to charming hamlets and villages like Tighnabruaich, Strachur and Lochgoilhead. Dunoon, with its Victorian pier and craft shops, cafes and museums, is the peninsula’s main town and home of the world’s premier highland games, the Cowal Gathering. Fringed by beautiful shores, rich in seafood, and stunning seascapes and filled with dramatic mountain and loch scenery, home to magnificent birds of prey and red deer, Cowal is a wonderful introduction to the West Highlands of Scotland.

A short ferry crossing from Colintraive on the Cowal peninsula takes you to the emerald gem that is Bute. Once the island retreat of Scottish kings, the captivating Isle of Bute lies at the heart of the Firth of Clyde. For such a compact island, Bute has some amazingly varied landscapes, from the lush, fertile rolling hills at the heart of the island to the craggy, heather covered moorlands of the north and the delightful sandy beaches around the coastline. Home to feral goats, buzzards and roe deer, the north of the island is separated from the mainland by the beautiful sea channel called the Kyles of Bute. The island’s main town, Rothesay, has a main ferry pier at one end of the bay, which is lined with a splendid Victorian frontage. Worth a visit are the dramatic, moated Rothesay Castle and the house
and gardens of Mount Stuart, belonging to the Marquess of Bute. 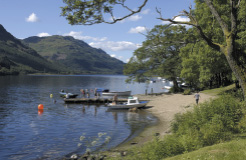 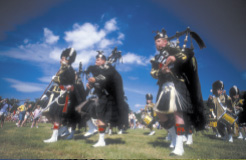