Just around the head of Loch Fyne lies the picturesque village of Inveraray. 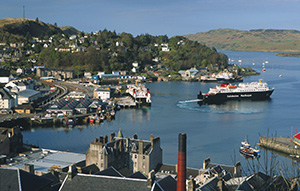 North from Holy Loch, beyond beautiful Loch Eck, you come to the village of Strachur and the shore of Loch Fyne, that long blade of the sea which carves into the Argyll mountains. Just around the head of loch Fyne lies the picturesque village of Inveraray. At one end of its bay stands Inveraray Castle, still the seat of the once powerful Dukes of Argyll. At the other end stands the pier, home of the old cutter, Arctic Penguin Maritime Heritage Museum, while, in the heart of the village, the 19th century jail takes you back to an earlier life behind bars!

Continuing south along the western shore of Loch Fyne, you pass through the picturesque towns of Lochgilphead and Ardrishaig, where the 18th century Crinan Canal still bustles with commercial and leisure craft. Soon, you arrive at Tarbert, with its beautiful natural harbour, former home to the once famous Loch Fyne herring fleet and now haven for a few fishing boats and a lively yachting marina, overlooked by the 13th century castle ruins. 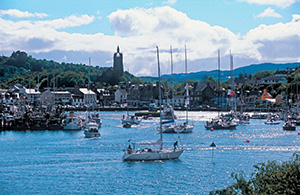 North of Inveraray, you can tour to Loch Awe, guarded by the impressive 15th century Kilchurn Castle and the towering mass of ben Cruachan. Below the summit lies the cauldron-like reservoir, which feeds the hydro-electric power station housed within the massive cavern excavated one kilometre inside the mountain. This spectacular engineering achievement is well worth a visit. On through the steep-sided Pass of Brander you descend to the village of Taynuilt followed by the picturesque shores of Loch Etive and the village of Connel with its dramatic bridge over the tidal rapids of the Falls of Lora. Passing Dunstaffnage Castle and marina, you arrive at Oban, the unofficial capital of the West Highlands. The harbour bustles with fishing and pleasure craft and the pier serves the many ferries to the Hebridean islands. Oban nestles in the stunning setting of a sheltered bay whose steep hillsides are lined with narrow lanes and crowned by the Colliseum-shaped McCaig’s Tower, with its outstanding views across the bay to the Isles of Kerrera, Mull and Lismore.